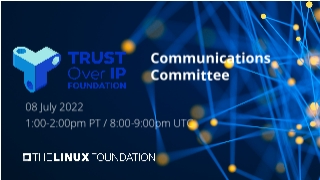 Judith Fleenor kicked off the meeting with the Anti Trust policy to review and the agenda. Judith Fleenor provided an update regarding BLOG Updates and Approvals. She inquired with the attendees to confirm they've had a chance to review. Daniel Bachenheimer blog was reviewed and formally approved. Judith Fleenor confirmed that we're ready to approve the Monokee blog as well and there was consensus that they approve to post this blog. She inquired about the Identiverse blog and mentioned that we're awaiting for some final feedback on this one to post and it was reviewed in real time and it was approved, pending Mike's input. Drummond Reed mentioned that it's critical to categorize this correctly to ensure we differentiate between the tool (i.e. wallet) and the multiple factors around the wallet, rather than the wallet itself. He believes the Wallet will be able to do DID identification as a factor and then a biometric verification for the individual as a second and more strong factor to standardize the new Standard authentication. Daniel Bachenheimer continued that he agrees with Drummond Reed and mentioned that he just wrapped European Identity Wallets and the EU Legislation is calling for two of three authentications, 1. something you know (Pin), 2. something you have (Government Wallet) and 3. inherent (Biometric). He continued that we don't know the answer to the biometric factor for reliability. How do we know the FIDO authenticator outside of a third party. Daniel Bachenheimer shared that he was referencing the ToIP Layers within the examples they discussed at the conference and how/where ToIP is represented. Drummond Reed continued that he believes authentication protocols are at Layer 2 or base Layer 3 and that the policies should exist in Layer 4. Judith Fleenor suggested we consider a new blog that details the authorization and how they play a role in the process and policy requirements for consideration and Drummond Reed recommended making the topic into a White Paper since the content is in depth and important to illustrate the authentication options. He also mentioned Privacy paradigm and PKI as other potential White Paper topics. John Jordan recommended we review the Aires Javascript contributions from Quebec to the collaborative efforts with his BC team. Judith Fleenor continued with the AI and Metaverse BLOG and the team to review. Judith Fleenor asked for an update on the W3C and DIF from Drummond Reed  and she mentioned that we should use the DIF blog and republish it on our website after we review it. Drummond Reed went on to discuss the standard process on how they process releases and share updates that include testimonials. Drummond Reed likes the idea of collaborating on doing something with DIF and Judith Fleenor mentioned that she recommends we carefully articulate the wording to ensure we don't exclusively mentioned DIDs and Drummond Reed mentioned there are folks asking for options without DIDs included in the conversation. Drummond Reed would like John Jordan perspective on the topic and asked for his input privately to share within the community. Judith Fleenor confirmed that we approve this group collectively get together to prepare a paragraph on behalf of ToIP; Drummond Reed to send a link to John Jordan for review. Judith Fleenor went on to share the DIF Blog for us to review and then tailor before we post on our website or do we want to work collaboratively for a joint blog. Drummond Reed suggested we publish something independently is we post on 7/19. Drummond Reed to write a joint blog with Chris from DIF and they would like to include Alex Walz in the conversation.

Elisa Trevino shared the Events page with the Communication Committee and they offered some feedback on additional information and content.

Judith Fleenor shared the updates on Hyperleger Global Forum and the Open Source Summit Europe and our Mini Summit (Early registration ends 7/17) and the LFPH event on September 12th. Judith Fleenor asked Drummond Reed about Alex's attendance at the Summit and he asked her to send out an email with an explicit request with a few Avast folks copied on the communication.

Judith Fleenor went on to discuss the website updates; she shared a view of the proposed layout and look and feel that details the membership and table.  John Jordan suggested we list Steering Committee first and Drummond Reed recommended a banner detailing a table with all membership levels for a high level overview. Judith Fleenor went on to share the front end page for AutoJoin and membership joining based on their current status. Judith Fleenor went on to shared the sample benefits page and shared that we're also working to get EasyCLA up in GitHub. Judith Fleenor asked if there are other items we want to include on the home page like a Year in Review, a new image for Join Us, an updated model page and she shared the current status for our website to review as a committee. Drummond Reed mentioned the Good Health Pass needs to be removed as well as the Year in Review. John Jordan recommended we highlight blog features. Drummond Reed recommended highlighting our design principles on the main page. Reference Architecture will be in place once they're ready in the fall. Judith Fleenor mentioned we need to have the stack image included on the website and Drummond Reed agrees that's a good idea.