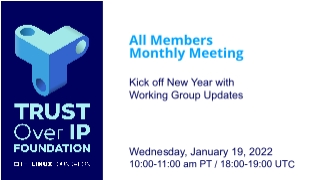 Judith Fleenor introduced the meeting with the Anti Trust rules governing our ToIP Foundation and then walked the members through the agenda. She shared the updates on our new members and announced that we are at 281 participant companies and 108 individual members. She mentioned the calendar updates that we made at the end of last year to ensure all members are subscribed to the calendar as they would like. She also offered our members to be added directly to their calendar, by reaching out to Elisa Trevino via slack or email. Additionally, Judith Fleenormentioned that we are working on google shared drives and discussed the accessibility of these drives exclusively to our members.

Carly Huitema introduced herself as a leadership member of the EFEG along with Steve Magennis Eric Drury  and stated that she and the team are working to reboot the EFWG after the excellent work by Carl and that they're working to recreate and reproduce many of the excellent things already in motion for the WG. They're interested in to learn not only the good work that members are doing, but to also learn and understand the business challenges that might be something EFWG could address by ToIP membership and ToIP itself. They plan to learn pathways within the WG and context by providing learning pathway, so that it becomes even more useful for people to access. Lastly, they're looking to highlight ecosystem projects and developer resources directly. She announced their next meeting and the speaker, Autumn Watkinson and the topic of ecosystem in the community of living organisms interacting with each other and their physical environment. They plan to discuss lessons learned from ecology and apply it to the ToIP ecosystems so certainly anybody and everybody is invited to join and they're encouraging folks to participate and help with white paper content. Lastly, she announced the new meeting time and provided a link with their meeting calendar times. member Antti Kettunen inquired about the resource directory and Steve Magennis stated that they have a couple different categories, system integrators and ISVs, legal and compliance. He went on to state that their goal is to highlight the brain trust that they've gathered here and ToIP to show the depth and breadth of the background that we have applying to these problems, so it's something is open to all members.

Drummond Reed announced the ToIP Approved Deliverables (ToIP Governance Architecture Specification V1.0, ToIP Governance Metamodel Specification V1.0, ToIP Governance Metamodel Spec. Companion Guide V1.0). each document has been converted into a PDFs and into the new Style Guide and File Name/Permalink Conventions and should be going up on the website this week. Drummond Reed went on to state that the first approved deliverable is a short technical operational requirements around a trusted IP compatible governance framework, the bog one, is the Meta model which is already being used out there and is the template for ToIP governance framework at any of the four layers and then the Companion Guide is a 30 page document that offers advice and guidance to governance framework authors. Drummond Reedwent on to mentioned their next steps for the working group is to backfill the terms in the current terms wikis we have available within the community. He continued by sharing that they're working to support governance frameworks that are being developed to using the governance Meta Model and great interactive dialogues. He shared the links for the GLEIF vLEI Ecosystem Governance Framework and the Yoma Rules Ecosystem Governance Framework. Then shared that the focus for 2022 is the layer specific templates for what are the specific roles and processes at each layer.

Darrell O'Donnell mentioned they've been focused on the Trust Registry Protocol which answers the following three questions: 1. This issue or authoritative for particular credential type under a governance framework to is is this verify are authorized. 2. Is this verifier, authorized to consume this credential, under this framework. 3. Does this trust registry, trust another trust registry under a particular governance framework which begins to allow us to assemble a trust web and to get the signals that are there because there's a big signal, but the difference between, say a national health trust registry announcing publicly that it trust another one versus using it, but staying silent on it that's quite a strong signal, so that one's underway we're hoping to distribute that in Q1 we'd haven't had any What I would call you know breaking feedback on the V1 where there are many more steps to any money more questions answer for version two but version, one should be distributed this quarter. He went on to share that the trust technology architecture Task Force underneath the tech stack working group has been extremely busy meeting twice a day on Thursdays, so that we get some APAC principally Australia participation what's been happening there is we've been going through various different graphics and components and we'll show you a graphic in just a moment. They're trying to get in the details on the tech side and how it aligns with the governance side. Level three is unique because we're not just talking about credentials anymore. In Layer 3 we're you'll notice in the top left of layer three in the orange it says credential exchange protocols. This is absolutely critical, this is where really a lot of the momentum behind ToIP came from and hyperledger areas is great example. Layer 4 we are defining a few things things like the trust diagram which again is a technical embodiment the governance frameworks and other pieces, but this is the diagram we're working through right now.

Andre Kudra shared that the participation has declined, but mentioned that they're working on the Public Utility Directory and the Public Identity Utilities for Digital Trust Ecosystems - Overview. They're working to transition to a new leadership team Jessica Townsend Alex Tweeddale and Lynn Bendixsen. Alex Tweeddalewill be presenting today, he introduced the new leadership members formally with a new slide. He provided an overview of the changes occurring in the group, specifically the Layer 1 utility illustrates what companies are competing and what sort of cooperating and the nuances and differenced between the layers. They want to expand on the scope and bring exciting and creative ideas to the group. One piece of that is the impact of KERI and incentive mechanisms for verifiable credentials. They're also looking to discuss decentralized Layer 1 Governance and voting structures, meaningful cross-utility interoperability and cooperating versus competing Layer 1 mapping. The idea here is to bridge the utility foundry work and create more alignment with the work items from other WGs. Lastly we want to create a utility map to illustrate the the overlap and complete interaction. Jessica Townsend the introduced herself to the members and shared her experience working with Accenture and stated that she's been a member for about two years and has have the chance to participate with the UFWG, Communications Committee and the Steering Committee.

Neil Thomson introduced the the working group updates and discussed their priorities to focus on the Alignment of Dynamic Data Economy (DDE) models, concepts and technologies with the more familiar self-sovereign identity (SSI) models. He continued to share, then we're the contents and governance and issues around the here also very sensitive, particularly with the most recent to EU data governance act and all the implications of that. So we're continuing to look at aligning, how does the data and the mechanisms around data for data exchange of data access inner work with KERI. And so you've got, of course, a big part of this is it's not just about the data this point in and it's about the semantics, the metadata you can exchange information or that are very strong underlying. and compatible an extendable metadata model from the source and destination so so a lot of the work that's gone on in the last year and a half, has been around what's called the OCA. They're also working to align the Data Intermediary role with the Governance Authority role in the ToIP Trust Diamond model. He announced their next meeting on January 25th at 1700 UTC. He went on to share the details of the current test forces, Notice & Consent TF, Privacy & Risk TF and the Storage & Portability TF and the work that they're doing within each TF. He went on to share that they're creating a new TF, Health Care TF.

Kalin Nicolov shared the current Taskforce streams regarding on-going discussion to initiate collaboration with Sovrin Identity for All (ID4A) on the topi of Potential Harm of SSI and ID4A. He shared their outreach efforts with Australian Digital Transformation Agency and a push in Q1 for a larger attendance and alternating AMER/APAC calls. Currently, we are collaborating with a volunteer Scott Lewis proposed to prepare a short video for us to summarize the goals and the ambitions which we will try and have, in the form of a video and a short intro and pitch that we include in our outreach initiatives in Q1. The push for us, obviously, will be larger and more diverse attendance as a primary goal, there are some wonderful ideas, including trying to bridge. The multiple worlds first example was mentioned Ai but also gaming to understand how people are coming in and out of each of these worlds and what they take with them and what they leave behind. To possibly understand what is the human centric experience when we are changing hats or changing worlds. He mentioned that they're also trying to set up regular stereo speakers, where we have speaker series akin to the first presentation. And currently we're talking have a very broad range from anthropologists to artists to understand what the human experience means in each of these contexts and then hopefully cross pollinate and enrich a little bit of thinking into two different angles. He went on to state that another key priority i'm going to highlight this as an end, for us, would be to set the deliverables and then publish them.

Kaliya Young mentioned that she would connect Kalin Nicolov with the product manager community in practice at DIF. She shared the work they're doing is complimentary and said we would connect the two.

Drummond Reed shared that they have term wikis and glossary are up and live. He shared that each term wiki now automatically produces as associated glossary; currently we have ToIP Core Terms Wiki & Glossary, ToIP Governance Terms Wiki & Glossary, Yoma Term Wiki & Glossary, eSSIF-Lab Glossary. Lastly, you can learn more here: https://wiki.trustoverip/org/display/HOME/Terms+Wikis. Daniel Weeks put this together and it's all open sourced. He shared a screen shot of an active terms wiki for Yoma that Nicky Hickman and team have been working on; this illustrates the terms and standardizes the glossary automatically. He continued that they're looking to backfill the three governance stack deliverables that he mentioned earlier to have terms in then that don't currently have definitions in the wiki for yet. They are working with the Governance working group volunteers and fill all those in and sort of that will complete  our beta cycle we're going to take the learnings we're then going to be reviewing all that between what we call the core of wiki glossary and the specific terms.